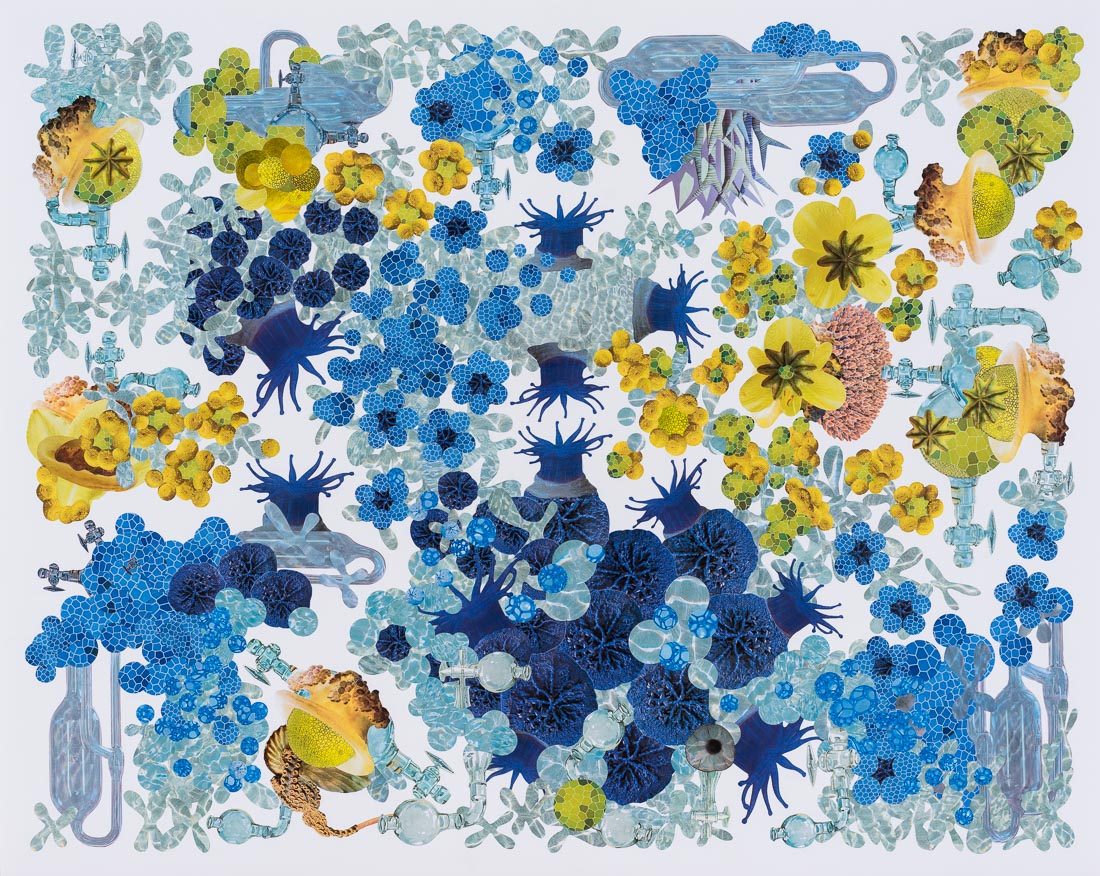 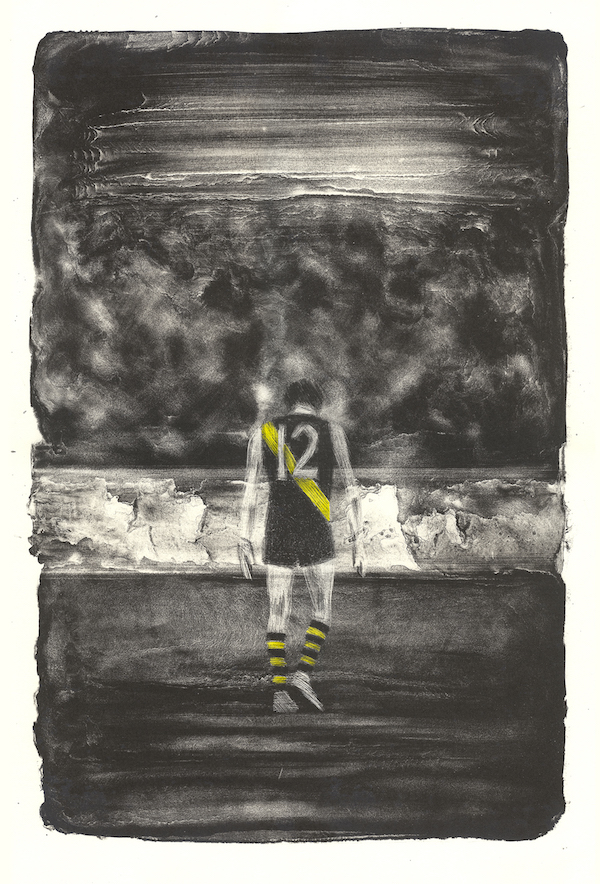 Jim Pavlidis lithographs, etchings and mixed media prints reflect the quiet and fleeting moments that have captured his imagination for two decades. 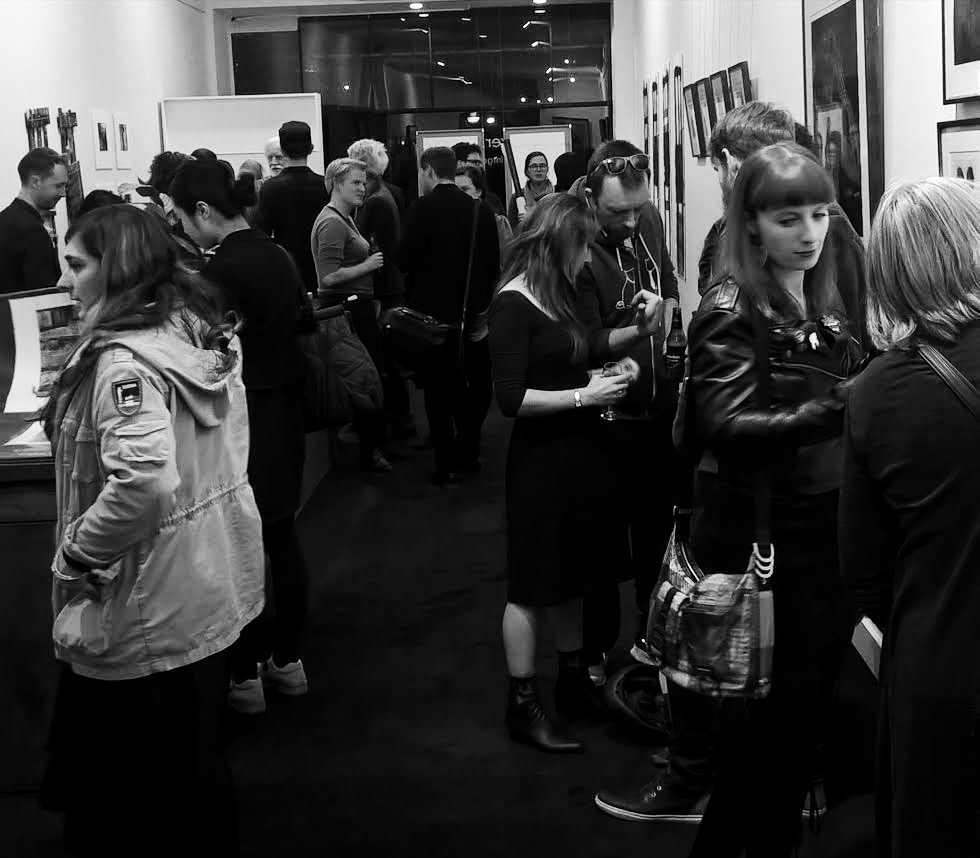 Printmaker Gallery is currently accepting exhibition proposals for our 2019 program.

We accept proposals from emerging, mid-career and established artists. For solo, group and curated exhibitions.

Please email the gallery for further information on gallery hire and how to submit your proposal. 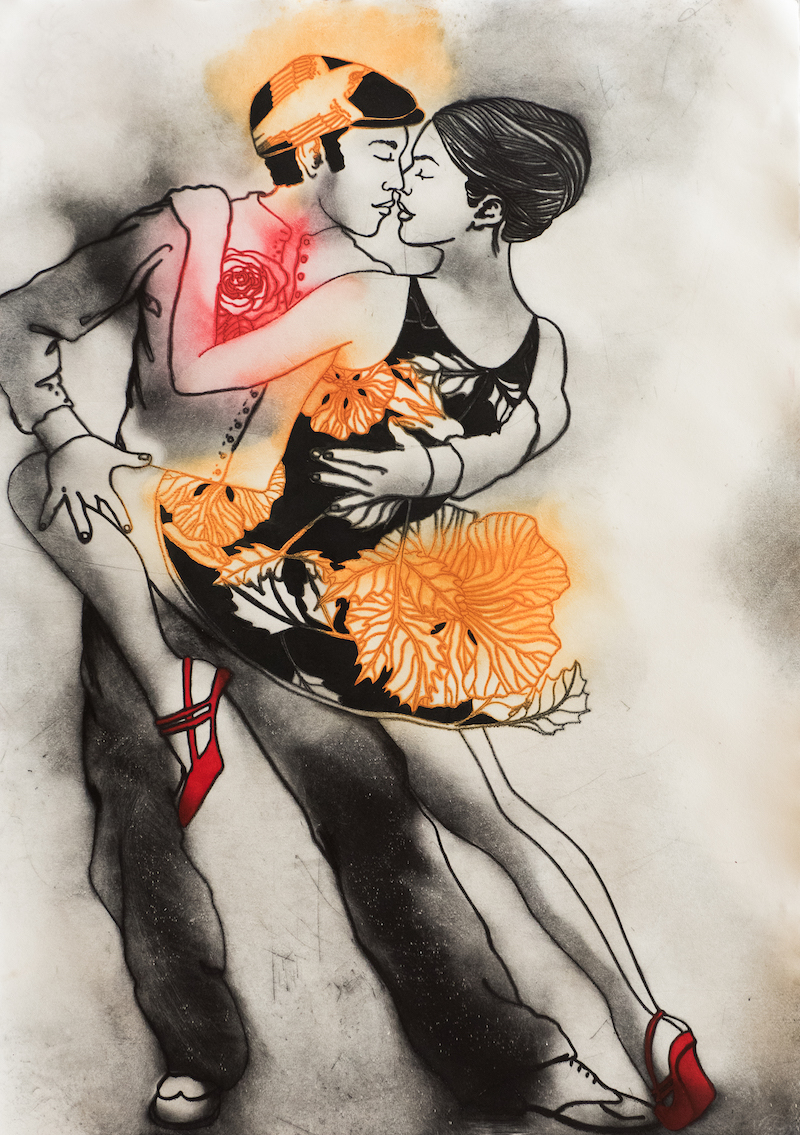 Mandy Renard – Dance Me to the End of Love

Printmaker Gallery is proud to present Dance Me to the End of Love, showcasing new works by Tasmanian artist Mandy Renard.

Dance Me to the End of Love is a tribute to the unique and eloquent music of the late Leonard Cohen.  Over a period of almost 50 years Leonard Cohen’s music has soared with the heights of his love and wept with the depths of his loneliness. His work is sacred and profane, epic and personal. This exhibition celebrates his tower of song and the “crack in everything…That is how the light gets in.”

We invite you to join us on Opening Night:
THURSDAY AUGUST 31st  6 – 8pm

Image: Into the Masterpiece Drypoint, edition of 40, 2017

Dance me to the end of love 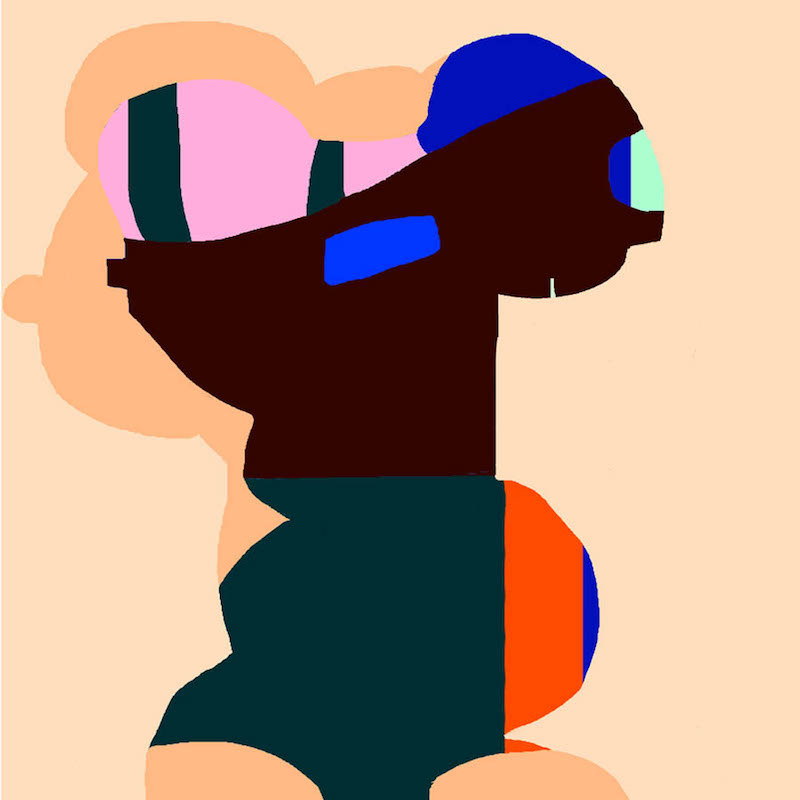 At the cutting edge of contemporary digital art and printmaking, Printmaker Gallery is proud to present her upcoming exhibition NEW NEW

Melbourne based N.Z. artist Philippa Riddiford comes from a comprehensive background in design and fashion.

Philippa received considerable media attention from 1986 to 1996 for her input in the fashion and design scene in New Zealand, with her well known and popular label ‘Philippa Riddiford Accessories’.

Continuing with her creative ventures in Melbourne, Philippa began experimenting with acrylic, spray paints, textas and cut-outs, which led to her current printmaking practice.
Her bold creations pay homage to the Mid Century Modern Design movement. Space, colour and form play a significant role in her work as does the importance of allowing room for chance and spontaneity. A sense of humour and a whimsical twist is always present.

Opening night 11th Aug 2017, from 6 to 8pm with a live performance from Phil Manning 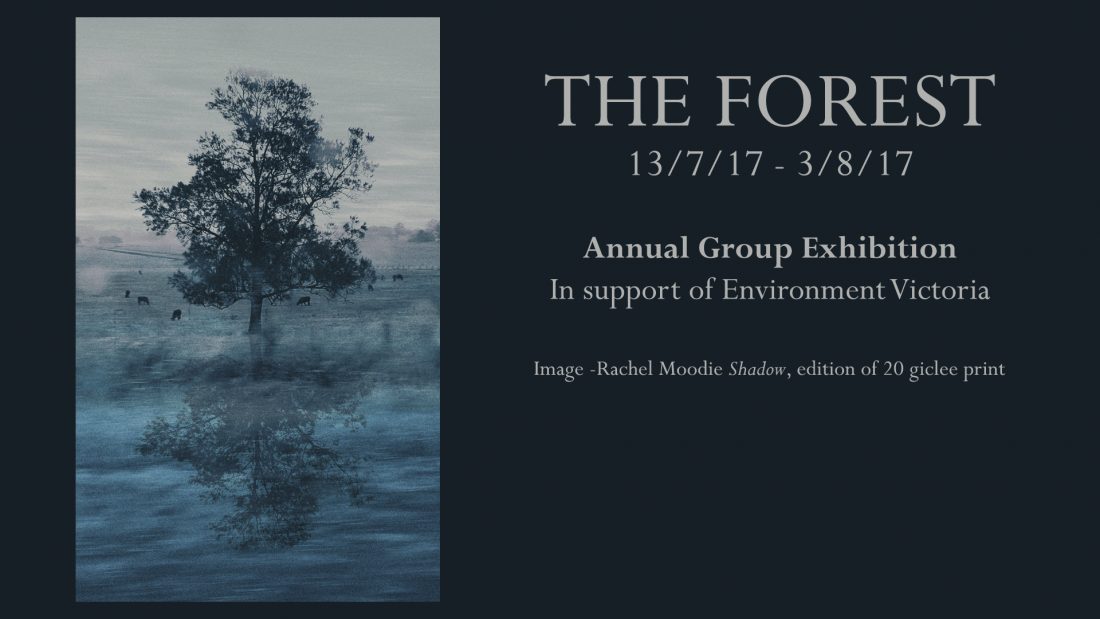 Printmaker Gallery is proud to present its inaugural annual group exhibition, The Forest, featuring over 30 local and interstate artists, each with their own unique representation of a tree. The gallery will be transformed into a forest in an effort to raise awareness and funds for Environment Victoria.

Within the context of worldwide growing concern about the environment and climate change, this exhibition sets outs to stimulate dialogue about the relationship between the artist and the natural world. The Forest aims to demonstrate how the experience, knowledge and practice of artists, including scientific, social and cultural issues, are woven through contemporary printmaking.

Our opening night will feature Greg Foyster, Communications Manager for Environment Victoria who will give a short presentation. Greg is a widely published journalist and an alumnus of the Centre for Sustainability Leadership. He has presented on environmental issues and at writer’s festivals throughout Australia. Greg was featured in The Age as one of their ‘Top 100’ inspiring and influential Melbournians of 2012.

About Environment Victoria: ‘Independent and not for profit, we’ve been campaigning to look after Victoria’s environment since 1969. With more than 40 grassroots member groups and 100,000 individual supporters, we’re a growing community of Victorians standing up for a safe climate, healthy rivers and a sustainable future.’ 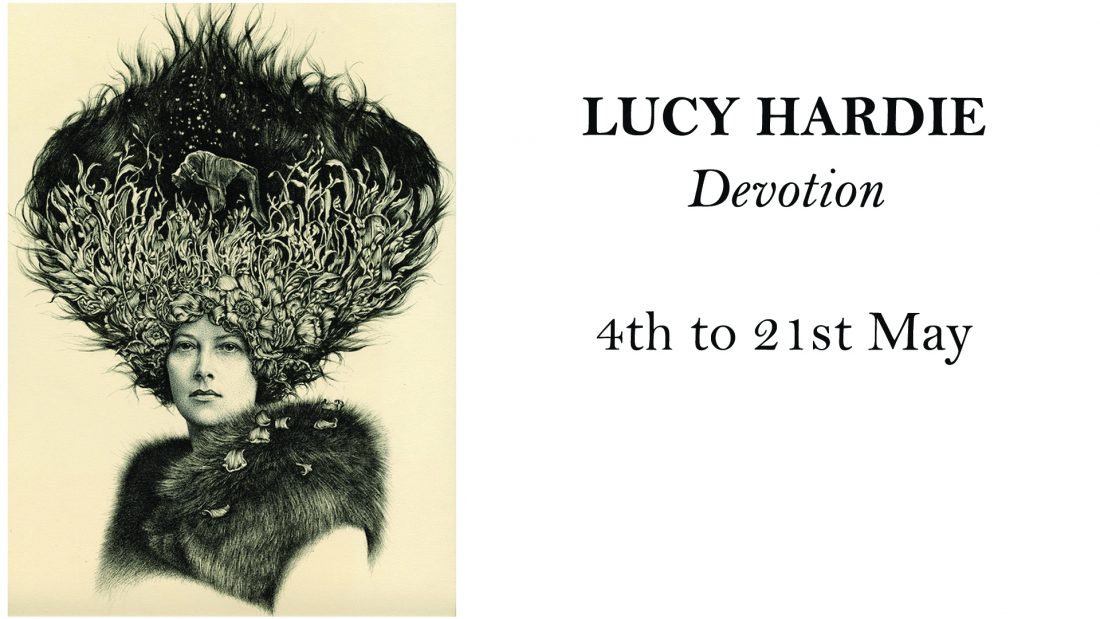 The intricately crafted and highly imaginative images of contemporary Australian artist Lucy Hardie are breathtaking to behold. Lucy’s mesmerising subjects inhabit a world of fantasy and mystery and draw us into a personal journey examining life, death, and spirituality.

With a strong emphasis on the female figure, her narratives are interwoven with elements of romanticism, mysticism and the gothic imagination. Influenced by the Old Masters, Lucy’s work seems to recall a time passed. Her meticulous compositions of light and dark rendered with the layers of fine lines and dots are awe-inspiring in their execution.

Lucy Hardie is an emerging artist who has already made a large impression throughout Australia, Europe and the US, her artwork is now highly sought after. She has exhibited extensively and is featured in numerous art and literary publications worldwide.

Devotion will showcase Lucy’s most recent limited edition Giclèe prints, along side examples of her original fine pen and ink drawings. 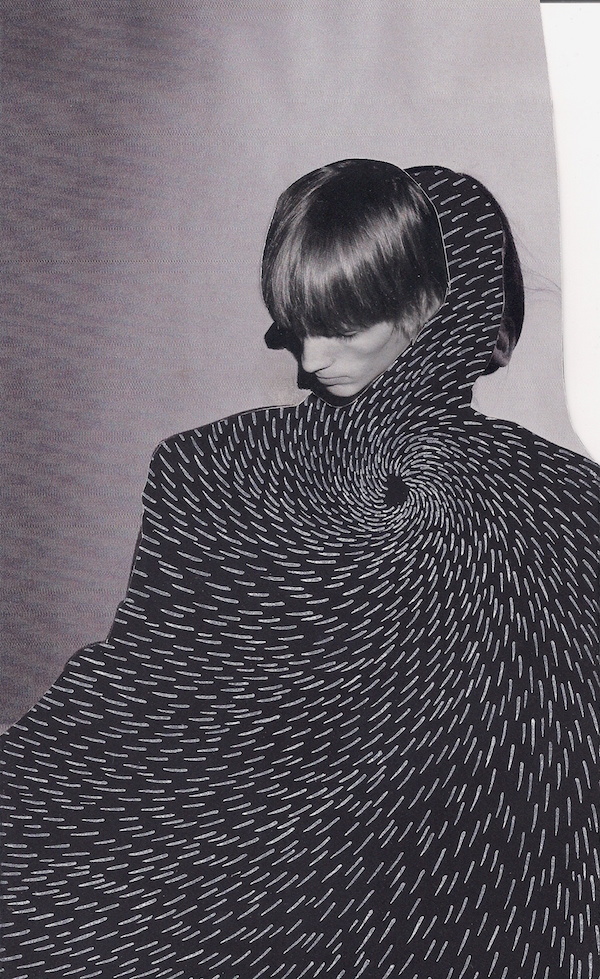 MICHAEL WEDD – In My Beginning is My End

Italo Calvino once wrote; My inside was out and my outside was in…originally, I was surrounded by water and now I am constituted largely of it.’ From the earliest signs of life on the planet as mono-cellular life-forms to our current evolutionary status as the dominant controlling species, we have displayed a remarkable ability to adapt genetically.

Michael Wedd’s work, both figurative and non-figurative, is an exploration of ideas pertaining to our collective identity. “It is a mapping of spatial and tonal relationships, antithetical opposites, micro-macro relationships, symbols, languages and mark making. A personal D.N.A of emotional intelligence/existence.”

In My Beginning is My End (the title taken from T.S Eliot’s Four Quartets) is a retrospective exhibition of unique state prints made within the last decade of Michael Wedd’s art career. Michael describes his art practice as “a way of connecting with the world and reconnecting with the primordial aquatic. Submerging and emerging images caught between creation and destruction.”